Last week we posted our advice on dealing with the latest Coronavirus update. That advice has not changed other than a rise on the urgency scale.

On a 1 to 10 (1 being no point in even occupying any of your thoughts with it, and a 10 being find an underground bunker and lock yourself in it), I’m at a 3, which is the “still going to work. Wash your hands all the time, keep an eye on foreign news service reports, make sure things are squared away at home” level.

It’s still too soon to know how bad the outbreak will end up being. We still don’t know if we’re seeing the beginning, middle, or end of the event, and it will probably be another 3 weeks to a month before we do.

However, I’m ready to make a threat level switch to 4 because of two things reported in the past 24-hours.

1 – Today in China, all 58.5 MILLION people in Hubei Provence have been placed in “lock down”, the reported details can be found HERE.

2 – The nature of China’s stranglehold on US pharmaceutical production and distribution. Read about that HERE

China’s shipping and manufacturing is experiencing a major slow down, and that will not be improving during the short term. That puts all in the US who depend on prescription drugs at risk due to shortages.

Threat level 4, on my scale, means acquiring 45 to 60 days of prescription meds for everyone in your family who requires them.  You will have to use your imagination, but I’ve heard there are some great travel deals for three-week Caribbean cruises right now, and perhaps your doctor will understand why you need an extra script.

Also, hydrogen peroxide, N95 masks, disinfectant wipes, and exam gloves should be stocked. N95 masks have started to dry up, or at least jacked up in price on Amazon. A source for such masks many won’t consider is auto parts, hardware, automotive paint, and welding supply stores. Check locally – you might be pleasantly surprised at what is still on the shelves. 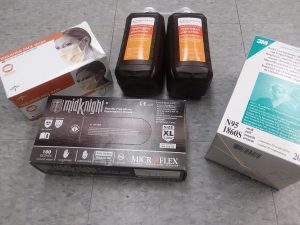 Pet food, baby supplies, toilet paper – daily use goods that won’t expire should life go on as normal – should be well stocked, as well.

Once again, I’m not suggesting anyone spend money that can’t afford, or to buy things that will go bad or be wasted. Were just not to the point of “grab everything, credit card bill be damned, we’re going on lock down!” Don’t let emotions get the best of you. Maintain your composure, don’t panic, use your head…and hedge your bets. This whole thing may be forgotten about by mid-March.

The problem with dissemination of this epidemic is that China is constantly lying about the scale, numbers, and general medical conditions of those who have contracted it. In turn, that has spawned massive amounts of speculation and conspiracy theories across the social media universe.

Dr. John Campbell does daily updates which are strictly science-based from available data. I recommend following his reports.

As of now there are about 700 people known to be infected outside of China, in about 30 nations. That number is probably trustworthy and is not yet what would be described as a ‘pandemic.’ The issue there is the 2-week incubation period, and the 12-24 days the virus can live on flat surfaces outside of the human body. Again, no one knows how far it’s actually spread at this point. Time will tell. So, go about life while keeping an eye on it.

And, WASH YOUR HANDS!