In September of 1940, the Japanese signed the Tripartite Pact, allying themselves with Germany and Italy. For the duration of WWII the three nations were known as the ‘Axis’ powers, referring to the triad of Berlin, Rome, and Tokyo.

At the time of the Tripartite Pact, Japan invaded French Indochina. This was a tactical move intended to cut off arms and supplies to the Chinese, whom the Japanese had been at war with since 1937. Fighting with the French only lasted a few days, ultimately resulting in a cease fire and armistice agreement which allowed the Japanese to control the ports and railways. The French in no position to fight Japan as Germany had sacked Paris in June and were now occupying most of France proper, the French Vichy government acting as little more than a puppet of Germany.

As of December 6th, 1941, neither Germany nor Japan were officially at war with the United States, however, tensions were building. The Japanese strike on the U.S.S. Panay, which was evacuating American citizens from Nanjing, was one of the aggressive acts pre-war that the U.S. absorbed without U.S. military reprisal. The event resulted in 3 American deaths.

Japan also signed a Neutrality Pact with Russia, signaling their intentions to expand into Asia, putting American interests in jeopardy.

In January of 1940, President Roosevelt agreed to a lend-lease program with China to provide materials and supplies to their war effort. At the same time, an embargo was placed on Japan, who, up until that time, had been receiving 90% of it’s oil from the U.S.

Loss of their petroleum supply put a massive strain on the Japanese war effort. They were not fighting on ground which expanded out from their borders, thus allowing for rail and animal transport. No – their supply lines relied completely on air and naval delivery, and that required voluminous amounts of fuel!

With approximately 18 months of reserves to work with, the Japanese set their sights on the oil fields of Indonesia (also known as the Dutch East Indies), the 4th largest oil exporter in the world. Taking the East Indies was not without its problems, two being the Allied relationship between the exiled Dutch Royals and America, as well as the vicinity of the American held Philippines. Japan feared such an invasion would resort in a declaration of war by America, but they couldn’t continue without oil.

Stuck within an 18-month window to act, the Japanese decided upon an audacious plan! Commander of the Imperial Japanese Fleet, Admiral Yamamoto, was not interested in picking a fight with America. He saw it as untenable. However, his bosses weren’t interested in hearing it, so Yamamoto presented his second-best advice to them, which was: If we’re going to do this, we’re going to do it my way. Yamamoto wrote to the Navy Minister these words, “We should do our very best to decide the fate of the war on the very first day.” And he planned to do so by annihilating the U.S. Pacific fleet with the use of carrier-born aircraft.

He had been experimenting with simulated air attacks on Pearl Harbor since early 1940, but at this point in history aircraft carriers were new, their full potential yet to be discovered. However, the Admiral had a vision – A vision that would require the development of a new shallow depth torpedo that could be dropped from a plane. The Japanese engineers were up to the task!

Relying on the brilliance of Commander Minoru Genda, an operational outline was formulated, which, on September 6, 1941, Prime Minister Tojo approved. The plan was code named “Hawaii Operation” and directed the Imperial Navy to prepare a 32 vessel fleet, including SIX aircraft carriers, for departure in two months.

The task force set off from Tankan Bay, Japan, on November 26, 1941, course set for Pearl Harbor, Hawaii. A Northern approach was chosen which was a risk in itself as it subjected the fleet to rough seas and storms. However, the Japanese hoped this would mask their movements, preventing allied aircraft and boat observations. The entire operation relied on stealth. Every vessel had to remain undetected – If not, all would fail!

Days ahead of the attack, Japanese submarines arrived in the waters of Oahu scanning for American naval activity and coordinating with spies on the island. They transmitted up to the minute intelligence data to the fleet until its arrival. Then, on December 2, 1941, the coded message “Climb Mount Nitaka” was sent from Japan, indicating the attack was a go.

On Sunday, December 7th, 1941, at 6am, 230-miles off the coast of Oahu, 183 planes were launched from their carriers. An hour later, a second wave consisting of 167 planes was launched.

Half of the first wave struck Pearl at 7:55am, taking it by complete surprise, while the other half struck the airfields around the harbor, completely knocking out American air capabilities.

Within 15-minutes, battleships California, Oklahoma, Utah, and Arizona were destroyed, and the West Virginia, Pennsylvania, Maryland, and Tennessee were damaged. The first wave retired at 8:45 am.

The second wave hit at 8:50am, mopping up whatever targets they could find.

By 12pm, the last Japanese plane landed on its carrier deck. Group Commander Admiral Nagumo considered his mission accomplished and opted not to send out 3rd wave. The Japanese fleet set sail.

America lost 2,400 military and civilian personnel dead, 1100+ wounded, 21 ships, and 75% of its stationed aircraft.  The Pacific fleet was decimated, or so the Japanese thought. The only “good luck” America experienced that day was that none of her Pacific carriers were in port. Carriers which would be used to turn the tides 6-months later at the Battle of Midway.

On December 8, 1941, The Congress of the United States declared war on Japan.

It was soon after my Grandfather entered into basic training at Great Lakes Naval Base. After graduation he was ordered to report to USS Edwards (DD-619), a brand new destroyer commissioned in September of 1942.

The Edwards received 14 battle stars during her service, making her the 10th highest ranking combat vessel of the war.

In December of 1944, a Japanese aircraft dropped a bomb towards the Edwards that should have resulted in a direct hit midships. Instead, the ordnance skipped off the pacific surface like a stone, bounding through the air right between the Edward’s smokestacks, and landing harmlessly in the water on the other side. It’s only because of that bizarre twist of fate that I’m here writing this today. 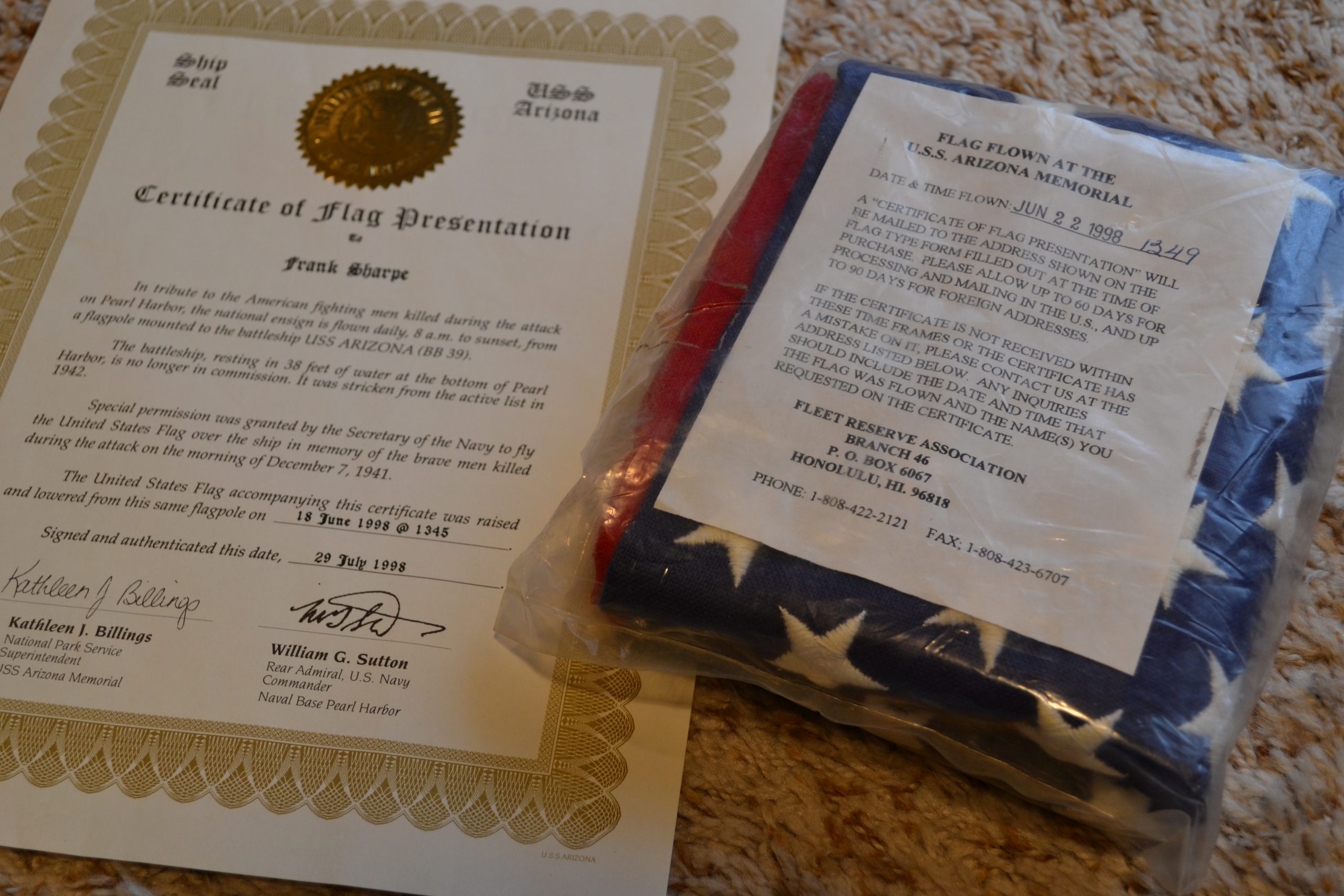 Flag which flew over the USS Arizona Memorial. It resides in my safe.