In my career I have witnessed three pistols destroyed by over-pressure from improperly reloaded rounds. I know of dozens of others that people have personally contacted me about. Most other Instructors I know have had similar experience.

The Sandy Hook event in 2012 instigated non-stop anti-gun rhetoric from politicians and activists, which, in turn, perpetuated a mass of panic buying. Firearm and ammunition manufacturers implemented 24/7 production in an attempt to meet demand. Even at full output, orders were backlogged for a year, and more!  It proved incredibly difficult for our students to find any ammunition, let alone “the good stuff.” Most grabbed up what they could when they could, paid through the nose for it, and were happy to do so.

Eventually, the momentum for bans and new laws lost steam, allowing the market to balance. But, there we’re now millions of rounds in the hands of gun owners that had been produced during the mad rush. As with all manufacturing performed hastily, quality suffers.  On the range over the past year I’ve noticed a spike in factory ammunition with defects. When I question the student, almost all have indicated it was ammunition bought during the panic that they only now have gotten around to shooting.  Brand-wise, the majority of problems have been with Remington 9mm ball, and usually it’s deformed, dented, or otherwise mangled cases. But, we’ve seen issues with number of other brands, as well. 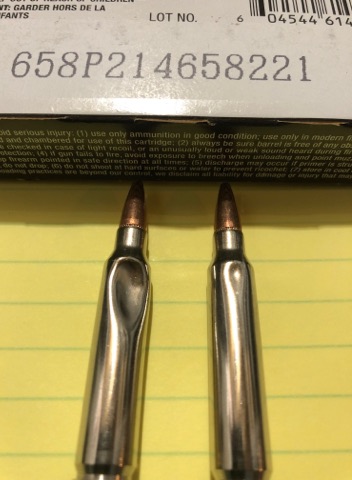 Inspection of all rounds before charging magazines should be part of your routine. The above rounds are 62 grain Speer Gold Dot. A student sent the picture to us this past week.

At the time of this writing, ammunition, firearms, and standard capacity magazines are priced the lowest I’ve seen  in the better part of a decade. Being that “buy high, sell low” is not the mantra of the successful, NOW would be the time to stock up on American-made factory ammo.

We’re a year and a few months out from the 2020 elections. If the attitude of the candidates during last week’s debates are any indicator, Democrats elected at any level, anywhere in the nation, will not hesitate to push forward any and all gun laws they can.  I know, what’s new?  But, now there is open talk of confiscation should they regain power.

As is our standard advice: if you can afford it, get it! Don’t go into debt or take out a second mortgage. Be smart about it, but, don’t wait. Even if it’s just a single box of 50-rounds per week, you should be able to put 1000 on the shelf before things bounce in the opposite direction. Think about what you will need for training. After that, think about what your kids and grand kids will need for training. Ammo, auto-loading battle rifles, and standard capacity magazines –  those items should take priority. Accessories can be had later.

No one can predict the future, but, I’ve never heard anyone say “I sure wish I didn’t have all this ammunition on my shelves.”