“Given enough time, any man may master the physical. With enough knowledge, any man may become wise. It is the true warrior who can master both…and surpass the result.” – Tien T’ai

On June 24, 2014, after a long battle with illness, Master Firearms Instructor Louis Awerbuck took his own life. 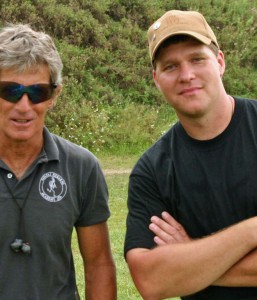 I met Louis Awerbuck on August 26, 2003.  My first impression: He was a man to be listened to. His handshake and rough, deep-voiced South African accent set the tone. Small in stature, sinewy, tanned leather-like skin, he moved like a jungle puma stalking prey. His eyes were always shielded behind the black lenses of his sunglasses, a fact that held true even during night shoots.  If you actually saw his piercing eyes on the firing line it indicated one of two things: He’d just learned something he never knew before, or you’d been told more than once to stop doing what you just did. In both cases the tip of the glasses was for emphasis, but the latter was not something you wanted to be on the end of.

Louis was a disciple of the late Col. Jeff Cooper, who was responsible for inviting him to the US and putting him to work at Gunsite. The ever humble Awerbuck suggested that his job there revolved around welding target stands and cleaning latrines, however, Cooper’s list of 12 Shooting Masters who hold a Doctorate in Firearms includes Louis. And that didn’t happen because he spent his years at Orange with a wrench in his hand; that occurred through his tireless efforts and study.

Louis may have started as student of the Art, but by the 90’s he was a high priest.  His life devoted above all else to discovering and teaching the reality of gunfighting.  As a writer, his dry wit and matter of fact delivery was a welcome change to an industry awash in bland publications that lacked substance. And as a teacher, his devotion, skills, and knowledge were unmatched.  There was no one on the planet who understood the defensive shotgun more than he, and I have yet to meet anyone who disagrees. The lives he saved through his research and training are countless – his effect will be felt for generations.

He was a man of few words, but if asked would elaborate at length on any subject – I learned early to take advantage. Over the years I was able to train with him on 5 separate occasions and I always made sure to buy him dinner to get a few extra hours of one-on-one. It was time well spent, and time I wish there’d been more of it.

He often stated (joked) that he had no friends and anyone claiming to be his “friend” was lying. I won’t lie, I wasn’t his friend. Louis Awerbuck was my teacher, I was his student.  And the lessons he taught me I’ll never forget.

“I seek not only to follow in the footsteps of the men of old, I seek the things they sought.”  -Anonymous