“The only thing constant in life is change.” – François de la Rochefoucauld

As much as we all try to keep life as we like, factors outside of our control always intervene. On Friday, Sept 8th, such a “factor” entered the life of a 53 year-old woman from Lansing, IL, when she arrived home to find a burglary in progress. The criminal went at her with a hammer, abducted her, and locked her in the trunk of her car while he completed the robbery.

He drove to Munster, IN, where he used the victim’s credit card to withdraw $140, and then proceeded to Burns Harbor, IN. Along the way he stopped and raped her.

In IN he parked her car at an abandon trucking company and again raped her, this time being sure to lacerate her internally with an undisclosed object. He then strangled her till she was unconscious, dumped her body, and set her on fire.

Word is that she may be able to leave the hospital by next April.

The animal in question was arrested, and has a thorough criminal record that including convictions for larceny, felony firearms, assaulting an officer, assault with intent to rob, and attempted escape, as well as multiple parole violations. 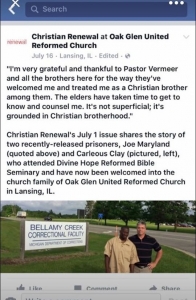 In July a local Lansing church posted this to their Facebook page.

I will not be laying in a hospital bed someday wishing I’d decided to spend a few days training rather than doing some mindless activity that offers no value to my life. No one gets me without a fight – a fight I will make sure I’m armed and ready for.

Perhaps going out drinking next weekend is more important to some – maybe cheering some sports team that will never love any of us back is a better use of time – Maybe that $500 is best spent on some new toy – After all, what are the odds of someone being abducted, raped, and set of fire, right?

Get over the fear, quit procrastinating, and get your priorities straight. Obtain training, and walk armed.

If you’re still having doubts, imagine the person in this world that loves you most having to identify your charred body on a slab at the morgue.

It’s time for our inner children to grow outer adults.

We get no second chances.

“On the other hand, when you grow up you will discover that some of the people in this world never passed beyond the stage of the cave-man.” ― Hendrik Willem van Loon, The Story of Mankind