“When a machine has moving parts, the parts need room to move!” – Mikhail Kalashnikov

It’s our habit at each rifle class is to announce to our students that it our most sincere hope that every firearm, magazine, and accessory they brought with them, BREAKS!

If it’s going to fail, we want it to happen on the range, not at the outset of their next fight.

We do our best to facilitate the discovery of potential problems by intentionally getting their rifles extremely hot during our ‘High Volume of Fire’ Drill, which happens immediately on day one after we confirm zero.

Students are instructed to run three magazines through their rifles as quickly as they can accurately make hits. This creates heat which will generally force any mechanical weakness of the rifle to appear – screws will loosen and improperly secured accessories will fall off. 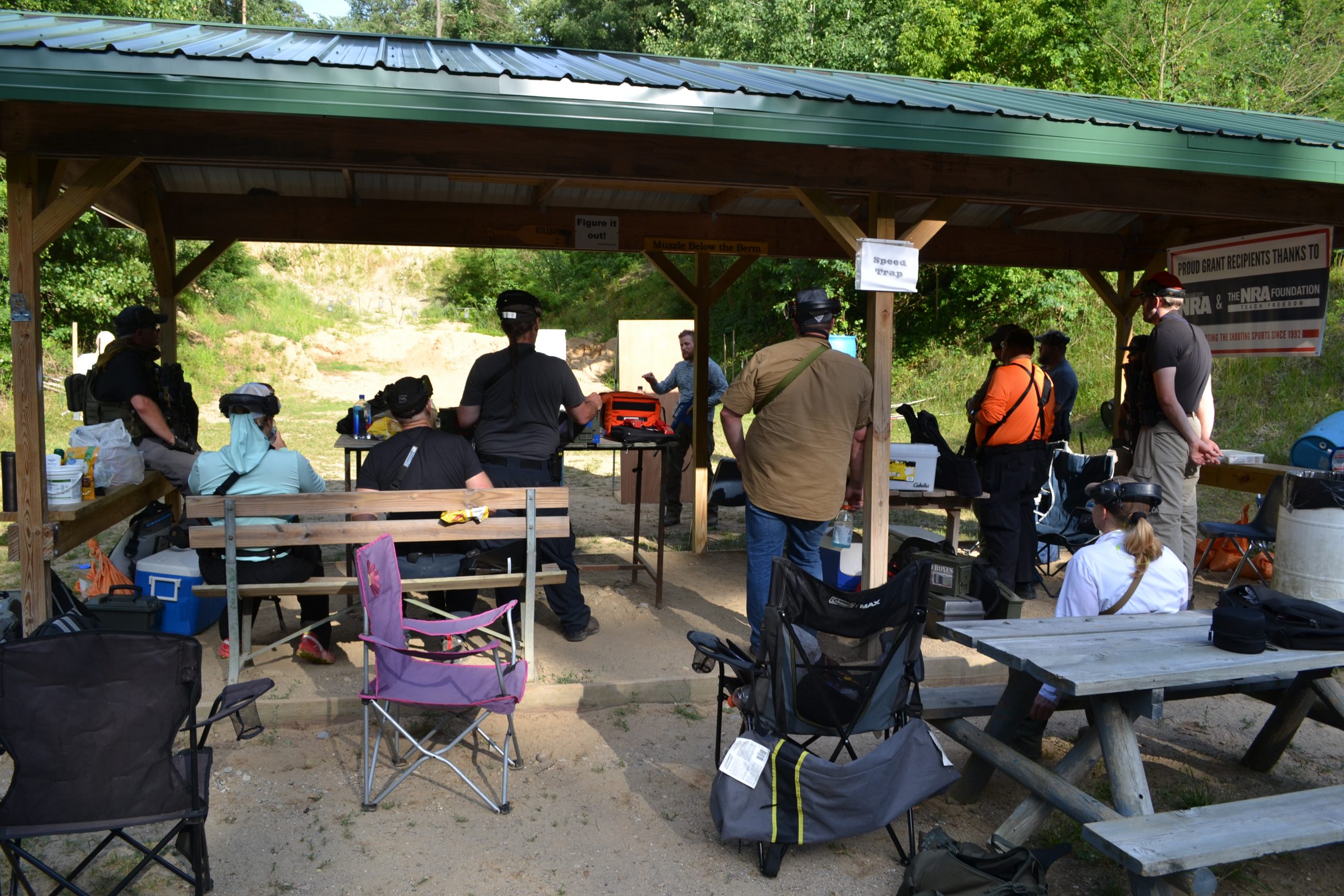 Fortress Staff Instructor Matt Ellison explains use of cover to our sold out Level I Rifle Class in Sturgis, Michigan.

Lessons from this past weekend

– Two students discovered the sleek and stylish one-piece aluminum handguards on their AR15’s became burn hazards by the 3rd magazine. They both indicated they would be remedying that issue immediately.

Original Military 2-piece polymer, w/aluminum insert heat shield, handguards, and those of the same design manufactured by Magpul, work just fine. They offer ease of removal for cleaning and gas tube repair, as well as excellent heat protection for the operator. No, your friends may not find them as impressive. But, if one’s goal is impressing their friends, then they’re not one of us – Our only interest is in impressing our enemies!

– One attendee had installed a horizontal foregrip on their AR15 handguard which was attached by two screws. The screws were too long and slightly touched against the barrel once tightened down. This created an intermittent zero/accuracy problem when the student put pressure on the grip. It was quite the head scratcher for the better part of 20-minutes until one of our Instructors finally took the rifle and student off to another range where he figured it out. Once the foregrip was removed, the rifle held zero.

– One AK47 variant in the class was a “post ban” version from the 1990’s equipped with a “thumb hole” stock rather than a conventional pistol grip. For the duration, our student struggled as the thumb hole created an abnormally long reach to the trigger. His index finger was just not long enough to make proper contact. He will be swapping the contraption out with a proper stock and pistol grip asap!

– Another student running an AK struggled with a cheap red dot sight that was constantly turning itself off. Iron sights were defaulted to.  In this case, “co-witnessing” iron sight were an impossibility due to the mounting set up, so the sight had to be completely removed before irons could be used. And that took time – time that would not exist in a fight.

Red dot and holographic sights are a welcome addition to most rifles, especially for those of us with aging eyes. However, we can’t stress enough how important it is that your rifle’s iron sights “co-witness” through your optic – meaning, when your optic fails, your iron sights can still be seen and employed through it.  We also think all optics need to be mounted on a quick-release detachable mount. There have been numerous cases we have seen where the optic’s lens has become “frosted over” when a student transitions from a warm to cold environment. Rain, snow, and mud, as well as lens breakage, will also leave the sight “blinded” from usage. In such cases, the operator needs to be able to immediately jettison the sight off of the rifle in order to get back into the fight! 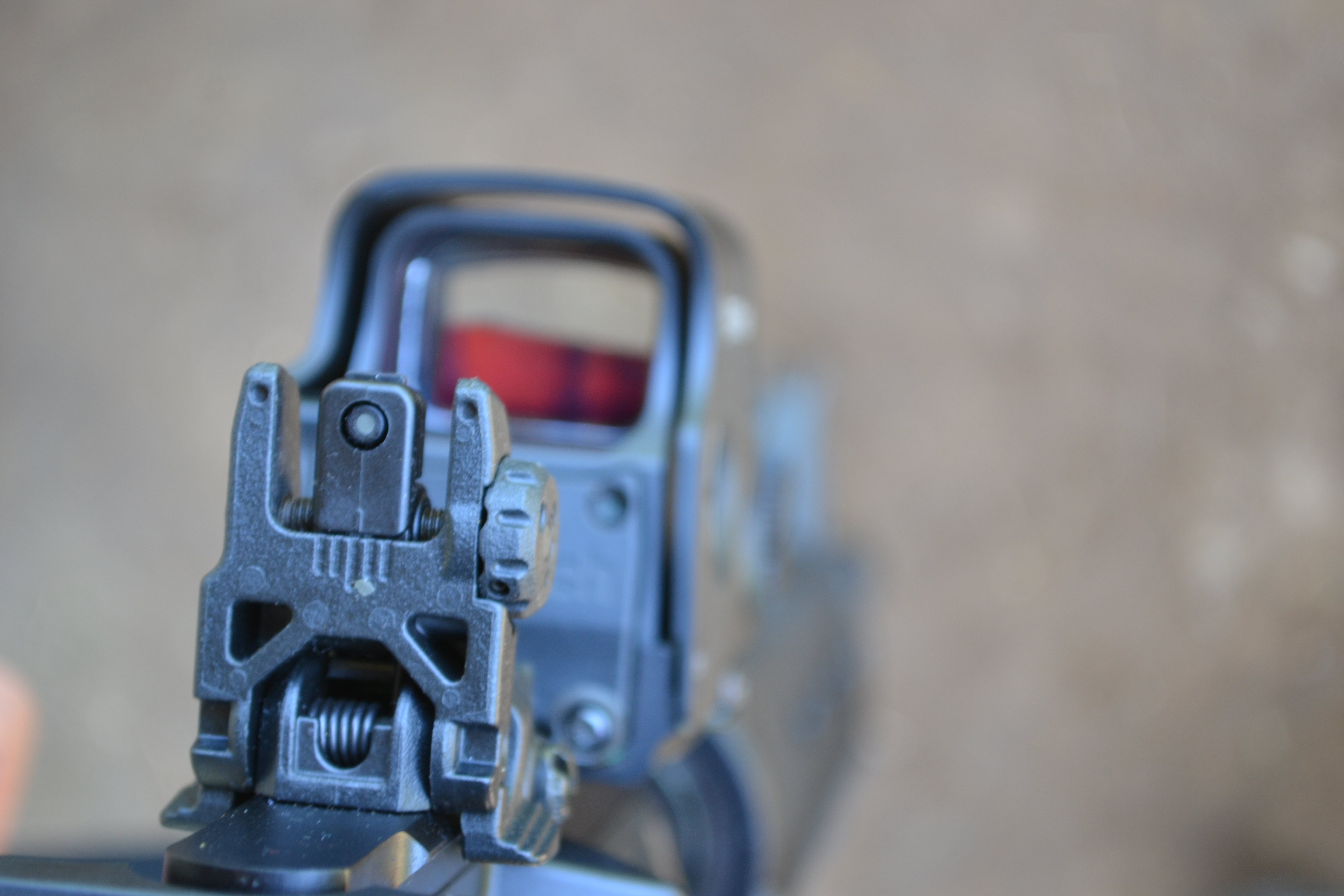 A a rouge internal part of an EOTech making this rifle’s iron sights unusable. A quick detach mount for your optic is a must!

– One student’s rifle was equipped with a cheap, flimsy fold down front sight. The sight post itself was adjusted all the way out, and, in order to properly zero, was in need of a few more rotations up. But, there were no more to be had!  The rifle was an inch and a half high at 40-meters, and our student simply had no choice but to run it as is while compensating for the difference.

With most parts and accessories, it does not pay to buy the bargain brands!

– Speaking of bargains, two students attended with STAG ARMS AR15 rifles they had purchased 8-years ago when the original company was still in business.  STAG never had the best reputation for quality, and their price point was an indicator to expect such. They eventually ran into legal problems and folded.

Both rifles experienced an occasional second “BANG!” when the operator fired one shot and then reset their trigger. The second shot would go off with the click of the reset.  Without calipers and original blueprints present, it seems like the trigger and hammer pin holes in the lower receivers were too far apart. It could also be a hammer or trigger component was out of spec.

Regardless of why, they’re death traps!

One of them only experienced the phenomenon a couple of times over the weekend. The other rifle did it most every shot and was unusable. I loaned that student my S&W M&P15 and I swapped out to my back up SA58 (FAL).  The Smith & Wesson M&P and DS Arms SA58 both worked with boring regularity all weekend.

STAG Arms was acquired by an investment group in 2016 and is back in business. According to their website they still offer a lifetime warranty, so, I encouraged my students to contact them and to keep me posted on the outcome.

The real lesson is: Don’t buy guns and glibly throw them in the safe expecting them to work when the balloon goes up a decade later! 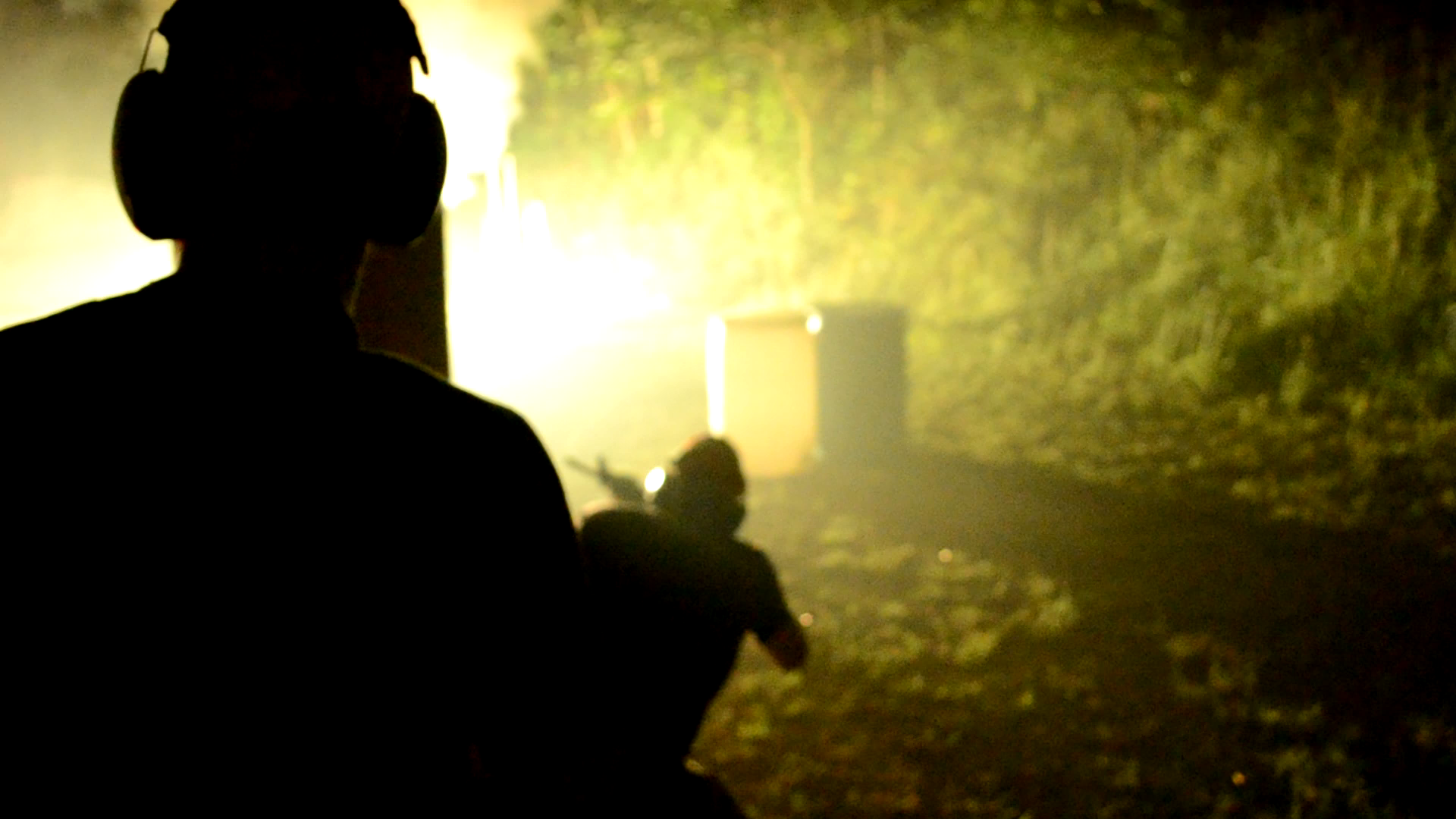 Nothing like a few blinding pyrotechnics to distract students at our Level I Rifle Course!

As a general rule, I suggest students show up with the gear they plan on fighting with. Most of us who travel around daily with rifles in our vehicles are not wearing our plate carriers and spare magazines. If we’re lucky enough to access our rifles, we’ll grab it and MAYBE have time to stuff a spare magazine in a pocket. The idea there will be time to “suit up” at the onset of a fight is fantasy land. Therefore, I run my rifle and spare magazines in that manner at most classes.

However, our world is quickly changing!

There are 1000’s of Americans over the past months who have found themselves standing in front of their homes and businesses in full battle gear, ready to defend. …and I count myself in that number. Because of that, I, and several my students and Instructors, chose to run the class in their full kit. (What a novel idea!)

Aside from the 90+ degree heat, most of us fat Americans are simply not used to carrying around an extra 25-35lbs of gear hanging from our shoulders and necks. Additionally, rolling around on the ground in all of it quickly indicates where the weak links are in the ‘Happy Family.’

The Happy Family concept comes to us via Dr. Tony Barrera, aka “Doc Gunn.” Doc suggests (to the suggestible operator) that every piece of gear we add to our ensemble must work with every other existing piece of gear. That knowledge can only be established through real world application of it all.

Those of us wearing carries were treated to multiple lessons on holsters pinching, slings getting tangled, ribs getting poked, connectors failing, straps getting in the way, and all the general discomfort that comes along with actually using gear rather than just owning gear.

We couldn’t be happier!

We saw no failures of any Magpul or Lancer magazines. Both brands are highly recommended! There were even a few surplus G.I. aluminum magazines present, and they worked just fine.  With the market being what it is now, and no sign of that letting up anytime this year, we’d suggest buying up as much of all of those as you can. (Stay away from steel AR15 magazines!) Magazines are a consumable – YOU WILL NEVER HAVE ENOUGH!

The issue with mags that we did see was the tendency students had to “over stuff” their mags with ammunition. There are dire problems that accompany that practice!

Multiple times students stepped up on line to run a drill and as they brought their muzzle to bear their magazine would rudely fall from their rifle at their feet. In my opinion, that’s a rather inauspicious way to start a gun fight!

This occurs because the magazine offers no compression space for the top round against the bolt carrier. The owner inserts the mag into the mag well till it stops, but the mag hasn’t actually snapped/latched in securely.

Our procedure to avoid this calamity is to first charge magazine with only the amount ammunition required in order to leave a full quarter inch of depression available for the top round. This usually amounts to leaving two rounds being left out. You should be able to press the top round down with your thumb a full ¼” into the magazine. This allows for proper lock up of the mag into the receiver.

The second fail safe is: When inserting your magazine, push it into the mag well and then strike the bottom SMARTLY. After that, give it a tug – try to pull it out. Do this with every mag change. That will either get you where you need to be directly, or give you the information you need to change plans.

This is another common occurrence when magazines are over stuffed, and we saw two students struggle with it.

When the bolt is pulled backward over a fully charged magazine (a full 30-rounds), the top round is held in place so tightly against the feed lips that the bolt can’t strip it out. The bolt actually jumps over it and 1) chambers thin air. Or, 2) Becomes wedged half way forward against the top round in the mag.

#2 is what occurred with one of our students. And, at no extra charge, during the NIGHT SHOOT! (How unfair!) It made for an interesting learning experience she will never forget! 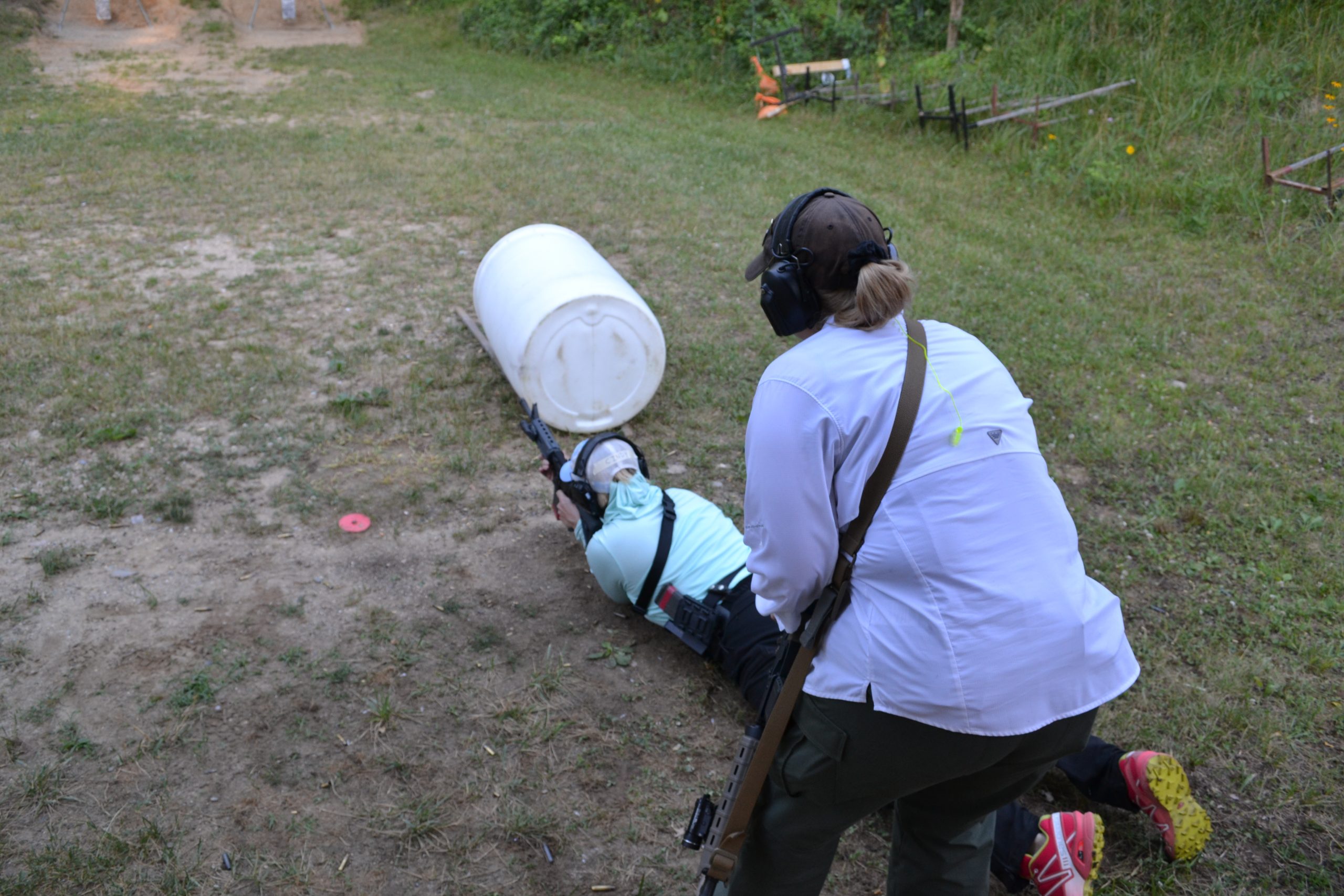 Fortress Staff Instructor Tricia Ellison works with a student on use of cover while shooting prone.

None of us will ever know what we, or our gear, can accomplish unless we get out and run it. That doesn’t mean plinking for an hour at a friend’s farm once a decade. It means going out for 20-hours and running our guns and our bodies hard under professional supervision.

If you’re of the mindset that you will be called on in the very near future to deploy your rifle in defense of your liberty, then you had better put in the time to not only learn how to use it, but work all the bugs out of it and your equipment.

That effort will prove to be the difference between the live professionals and the dead amateurs.

Which are you planning on being?

“It all looks great in the showroom” – John Farnam