“In a day and age when almost anything can be bought, respect is the one quality which still has to be earned…” – Louis Awerbuck

Initial reports were that this was a “malfunction of a prop gun”, insinuating that somehow a blank cartridge had caused a catastrophic detonation sending shrapnel into the victims.

My first thoughts upon hearing the news were a) ‘This had to have been a propmaster’s inexcusable, error, or an intentional criminal act by someone on the set.’, and b) ‘Alec Baldwin is my mortal enemy when it comes to all things politics and guns, but I wouldn’t wish such on thing on anyone.’

As with most first reports, major facts were missing – A whole lot of information has come out in the past 24-hours and my attitude has become much less forgiving.

Here’s what we know so far:

1 – Alec Baldwin isn’t just an actor in this film, he’s a producer on it. A producer is a wide swath term that can mean a lot of things. Sometimes it’s the person financing the production, and sometimes it’s a person who is making all the day-to-day decisions about the production – from crew, to budget, to sets, to transportation and lodging.

I haven’t any solid idea what Baldwin’s responsibilities were on this film, however, we know the production was experiencing turbulence with the crew who staged a walk-out on Thursday complaining of harsh and unsafe working conditions, and they we’re replaced by local, non-union replacements the same day. He, no doubt, was aware of the complaints and making on-set decisions.

2 – One of the complaints the crew lodged was ridiculously unsafe gun handling. So far there have been eyewitness emails and tweets about THREE separate live ammunition Unintentional Discharges (UD’s) on set before the Baldwin shooting occurred.

3 – The gun Baldwin fired was handed to him by Assistant Director Dave Halls, who has stated to police that he picked it up off a prop cart and thought it was unloaded, and he also told Baldwin it was unloaded.

[Side note: Hall worked on The Crow. The film Brandon Lee was killed on through a blank gun mishap. One would think he’d be a bit more careful.]

4 – The set “armorer” was 24-year-old Hannah Gutierrez-Reed. She is the daughter of Thell Reed, who was one of Jeff Cooper’s ‘Combat Masters’ (with Jack Weaver and Ray Chapman) along with being a film production armorer and stuntman.  I know little else about her other than this wasn’t the first movie she worked as head armorer on – it was her second. Regarding her age, she may have 20-years of practice and teaching from her father under her belt, making her a completely competent person for the job, or she may have been in way over her head.

“She also admitted in the podcast interview that she found loading blanks into a gun to be ‘the scariest’ thing because she did not know how to do it and had sought help from her father, legendary gunsmith Thell Reed, to get over the fear.” – Statement from the below linked article quoting her in an interview regarding her first job as a set armorer, which was earlier this year. It doesn’t speak very highly of her skills, now does it?

I’m leaning towards the latter because of this article, a perusing of her Twitter account (which she deleted today), and the next point.

5 – There were live firing guns on set AND LIVE AMMUNITION, which the armorer, crew, and actors all knew about. And these weren’t M&P’s in the security guard’s holsters, or even Glock 43’s in an actress’ purse in her trailer. No – these were antique Colt revolvers loaded with live ammunition masquerading as “props” just laying around on unsecured carts. We know this because a single round was fired which passed through the chest of the cinematographer and then hit the director – blank cartridge “shrapnel” did not do that. We also know it was a live round from the search warrant filed in Santa Fe County court. And we also know it from the email Local 44 of the International Alliance of Theatrical Stage Employees sent out to its members which said it was “a single live round.”

This is a level of stratospheric imbecilic incompetence that is absolutely unfathomable. 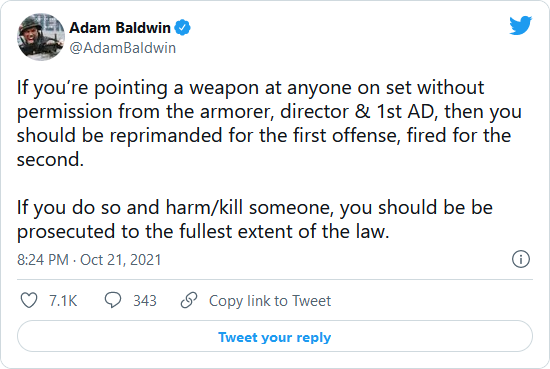 Looking past the insanity of using live guns for a movie production and taking what happened (according to the latest reports) at face value: A LOADED, LIVE gun, along with other prop guns, was placed on a cart by the production armorer. Assistant director Halls picked it up and didn’t check, instead asked Reed if it was loaded – Reed replied “no”. He then handed it to Baldwin who also didn’t check it, who then proceeded to point it at crew members, cock it, and press the trigger.

All three people managed combinations of violations of ALL FOUR OF COOPER’S RULES! All of them are culpable.

Seriously, one of the loudest voices for gun control in this nation can’t be bothered to practice the most basic of gun safety rules in his own life.  Go figure.

In 2021 there is no excuse for live firearms (guns capable of loading and firing live ammunition) to be used on any movie set. To do otherwise reeks of laziness and corner cutting to save a few bucks. This wasn’t a group of college film students with no experience with guns working for free on some backyard production – this was a real Hollywood film with funding for an on-set armorer, and was being produced by one of the biggest names in Hollywood who has been in 145 films and TV shows and who produced another 25.

There should have been proper gun safety being exercised, and there wasn’t.

Additionally, let’s not keep up the fallacy that this was a “prop gun” or a “misfire” or a “malfunction” – this was a loaded, live gun that someone pointed at other human beings then pressed the trigger. Said firearm worked just as advertised, yet everyone involved now sits in stunned amazement.

No matter what anyone on The View says over the next week, no matter what Alec Baldwin tweets, this, on multiple levels, is his fault. He ran a shoddy production, and, in the standard liberal practice of do what I say not what I do, treated his employees like crap and put money over safety, ultimately resulting in the death of another by his own hand.

I suspect more details will come out over the following weeks which could potentially alter my opinion…a little. But, regardless of any new information, there never should have been a live gun loaded with live ammo placed in Baldwin’s hand – and someone, or multiple people, are responsible for that – including him!

There may be a case made for negligence, recklessness, and perhaps manslaughter under New Mexico law [Link to video of Andrew Branca on the Baldwin shooting and New Mexico law]. We shall see what the investigation produces, but I can’t see it going that far – after all, he’s Alec Baldwin. No doubt he will most certainly lose all the lawsuits filed over this, as he should. Most will probably be settled for astronomical amounts before they see trial.

Of course, none of that matters because the dead mother of a young son can’t be brought back to life, and now Alec gets to live with that.

My hope is that he, and the rest of the responsible parties, will be held criminally accountable by the New Mexico State’s Attorney. But, my prediction is that he will eventually hit the talk show circuit where he will be fawned upon and treated as a victim while being praised as “strong and brave” by the same blathering idiots who already worship him like a god. And then, through some incredible feat of mental gymnastics, he’ll eventually turn this event into a anti-gun talking point. Of course, this wouldn’t be the first time I was accused of being overly cynical.

Regardless of the eventual outcome, the real lesson for us is re-commitment to the 4-Rules of Gun Safety before we find ourselves regretting an act that can’t be undone. Our gun handling must be deliberately proper each and every time.

– No gun shop exceptions.
– No gun show zip tie excuses.
– No “no one is watching” laziness.
– No “but, he said it wasn’t loaded” absolution.

Step up, take charge, and act responsibly at all times!

RULE I: ALL GUNS ARE ALWAYS LOADED!
[Treat them accordingly! Do not “pretend” this is true, you must BELIEVE it! Make it a permanent part of your character.]

RULE II: NEVER LET THE MUZZLE COVER ANYTHING YOU ARE NOT WILLING TO DESTROY!
[Can you afford to buy what you are pointing your gun at?]

RULE IV: BE SURE OF YOUR TARGET AND WHAT’S BEYOND IT!
[Never shoot at anything you have not positively identified. YOU are responsible for the terminal resting place of the bullet and everything it strikes from launch to rest. We are all legally, morally and ethically responsible for EVERY projectile that leaves our barrel.]