Along with the day-to-day operations of Fortress, I act as Director of Training for Bruzer Less Lethal. For those not familiar, Bruzer is owned and operated by Fortress/DTI Instructor Tommy Teach, and produces a 2-shot, 12ga, over-under pistol, known as the ML-12. The ML-12 launches less lethal munitions, such as bean bag rounds, and is popular with police agencies in the US and overseas.

My duties with Bruzer are traveling the globe with Tommy and teaching the Bruzer Use of Force, Train-the-Trainer, and Armorer classes to law enforcement purchasers of the ML-12.

Last week we attended a Hostage Rescue Team/Less Lethal Munitions certification course at a county jail in the Midwest where we presented a demonstration of the ML-12 to multiple prison HRT and SERT groups.

While on break from acting as “hostages” during the scenario-based training portion, I observed an interesting flaw with one department’s 40mm launchers.

The front sight post was exactly that – a cylindrical post resembling a roll pin. And, it, like the rest of the launcher, possessed a matte-black finish [my guess is it was anodized since it was machined from aluminum.] 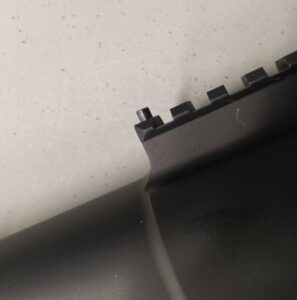 The front sight post shown from the side presents a strong image of “white line” issue.

The Problem: The round sight post, combined with the semi-reflective finish, created “false positives” when the light struck it from various angles. 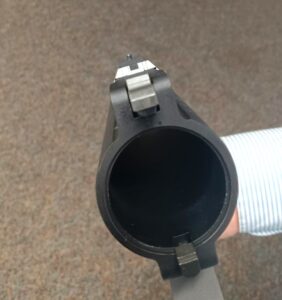 The front sight post has a white line of light glare on the left side, As you held it up in a reverse lighting, the line would appear on the right.

If the light was hitting from the left, the front sight post would have a refection on the left side of it, creating what looked like a white line, just like so many front sight blades possess. However, due to the curve of the bar stock, it only would show up on the far side. That would cause the user to hold the white line to the middle of the rear sight, as so many of us have been trained to do. Of course, what this actually creates is a misalignment of the sights! To the point where a bean bag shot from 25-feet at an offender’s thigh would result in a complete miss! 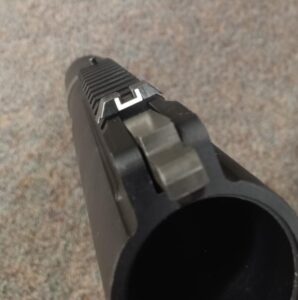 The rear sight is actually manufactured with the “white line” commonly found on many models of Glock pistols. This exacerbates the problem as shooters familiar with that sighting system will subconsciously be looking for a white front sight to line up with the rear.

I was told the launchers in question had only been brought out for the class. Normally, they sit gathering dust in a weapons locker and are not the primary launchers the department deploys, nor had they ever been.

Generally, such launchers come with a Weaver rail attached, and most departments take advantage and install some form of red dot/holographic sight, ignoring the iron sights completely.

Because these were “spare” launchers, no one thought spending money on optics was appropriate. But, they also never trained with them enough to see (literally) the reflection problem with the iron sights.

My advice to the officers was, as a temporary fix, to immediately find an office desk, retrieve a bottle of White Out, and paint the front sight. Glow paint would work even better. Commissioning a gunsmith to replace the sight with square stock would be best – although probably a high cost that could just as easy be spent on a red dot optic.

As someone who’s job is to think things through to worst case scenario, I wonder what would happen in the event of a major prison riot, or civil unrest, when all hands are called on deck, and all less lethal gear is suddenly pressed into service. That’s not the time to be sending rounds down range with no chance of hitting their intended targets!

It’s also not a morale builder that the manufacturer managed to go though an entire testing and development phase and then put this sight into production without anyone noticing the glare issue. There’s a reason front sights are machined with flat sides (bladed), and this is it. Manufacturers have understood it longer than I’ve been alive.

Again, since the introduction of rails and optics, the sights on such launchers are most likely an afterthought. The idea being that no one would ever use them, so what’s the cheapest way we can put a sight on it. Apparently, “drill a hole and press a roll pin in” was the answer.

Expecting anyone, including firearm manufacturers, to have your personal best interest at heart is a potentially fatal mistake!

It’s up to us to know if we can depend on our equipment. And we don’t know what any of our gear is – good, bad, or in need of alteration – until we test it in a harsh training environment.

In our business,the serious operators train intensely – they push themselves, and their equipment, to the limit!

Our attitude is: If it’s going to break, we want that to happen NOW!

Far better for us to find the weaknesses of our gear in training than in a fight! That means extra cost – In time, energy, cash, and ego. We intentionally search for flaws, and when we find them we’re not afraid to admit we were wrong. Our lives depend on it!

The amateurs sit at home polishing guns to impress visiting friends. We get ours dirty, hot, and treat them as the fighting tools they are intended to be. Yes, we clean them and maintain them, but we’re not afraid of scratches, worn finishes, or resale value. Our concern is not impressing friends, it’s impressing our enemies.

Our firearms are pieces of life saving equipment – tools. No tool was ever used to create anything worthwhile sitting in its case, and nothing substantial was ever learned by its owner through staring at it!

The hard truth is this: No matter how much you hug, kiss, and love your gun, it will NEVER love you back! And when you have long departed this mortal coil, it won’t love its new owner, either.

Defensive firearms are meant to be shot – often! …for our own sake.

“It all looks good on the showroom floor.” – John Farnam