The advent of WWII brought with it major advancements in small arms design, and set the foundation that would become common requirements of the modern battle rifle. Auto-loading and magazine fed quickly replaced the bolt-actions of the day, and by the 1960’s wood stocks had been replaced with polymers in the majority of modern military rifles (the AK47 and M14 notwithstanding.)

The introduction of weather resistant materials in stocks, grips, and fore ends was for good reason – wood is not as durable and often suffers from swelling and contraction as a response to humidity. Military rifles that incorporated wood stocks often had multiple coats (03 Springfields had 20!) of boiled linseed oil [Term corrected from “lacquer”] applied in an attempt to negate the swelling issue; a tactic which worked reasonably well.

For decades after WWII Americans collected and fired military rifles, many acquired through the government’s Civilian Marksmanship Program (until 1996.) 10’s of thousands of surplus Springfield, Garand, Enfield, and .30-Carbine rifles were sold to citizens from the 50’s to the early 90’s, leaving little demand for new production.

However, to keep up with demand as the supplies of vintage rifles began to dry up, companies began offering reproductions of the most common. Presently, Inland Manufacturing, Fulton Armory and Kahr Arms (under the Auto Ordnance name) all manufacture quality .30-Carbine rifles which are quite popular with our students. 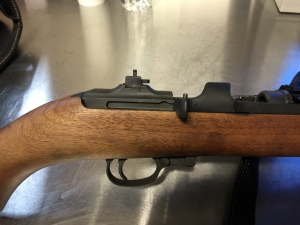 .30-Carbine shown with the bolt stuck at half-travel due to binding with the rifle’s stock.

We see many in classes and there are rarely any major problems that occur.

As is common in America, few gun owners take the opportunity to test their firearms in adverse weather.  Most shun rain and snow for more pleasant shooting conditions, and thus never get the full picture of their rifle’s reliability.

In our case, courses are planned a year in advance and there is no stopping for weather. We simply have to work with what we have, and that gives us great insight (by massive failures) into the potential issues that arise when guns, slings, holsters, optics, and magazines are exposed to the brutality of the elements.

At a recent Level I Rifle Course a student arrived with a copy of the Kahr Arms .30-Carbine. It worked flawlessly during the first day of class with temperatures in the high 30’s and sideways rain pelting it all day. By dusk lightning was observed in the distance. An immediate cease fire was called and the range was quickly vacated.  Rifles were unloaded on the line and stuffed hurriedly into cases. Few were wiped down, the .30-Carbine being one.

Kahr has produced a wonderful version of the .30, and includes the standard walnut stock the original rifles were equipped with. However, it does not include the heavy coat of linseed the military rifles possess. The re-issued rifle has a light stained finish, which looks beautiful in the showroom, but offers little protection from moisture.

Why is this important? Well, as our student found out, the stock of his rifle swelled overnight from absorption of rain water, rendering it a paperweight! The swelling affected the clearance between the stock and the charging handle, preventing it from moving freely. 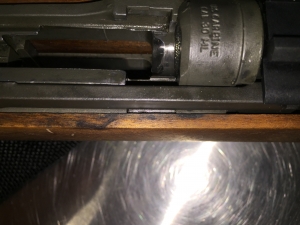 Distinct marks on the surface of the stock where the charging handle is sticking.

Nothing could be done to immediately fix it without butchering the stock with a knife blade, so it was abandon for the day and replaced with a spare AR15.

The student informed us a week later that the stock had been modified to allow more clearance for the charging handle, as well as stripped and finished like the originals. His concern is no longer aesthetics but reliability – an attitude we applaud!

We’re ecstatic that this lesson was learned in training, and not when it could have cost him his life. Hobby shooting is hobby shooting – It offers us little real world information. Getting out and running our guns hard in the worst of conditions gives us the feedback we need!

Aesthetically pleasing wood grain and finishes may impress our friends, but who are we more interested in impressing – Our friends, or our enemies?