‘Your Honor, I didn’t know that under your black robes of justice you wear a white robe of the klan.‘ – One of many hate emails sent to Judge Schroeder this past week

As the Rittenhouse trial comes to an end there have been rumblings on social media by the usual gaggle of Marxists criminals regarding pre and post verdict rioting.

Combing through all of it in attempt to separate the truth from friction is not really worth the effort.

What is worth the effort is deciding now how to respond to the unrest when it appears.

I’m of the opinion that should civil unrest break out this week, it will be a set-up (much like January 6th.)  The mission will be to goad good people into a fight in order to create more Rittenhouse events, and ammunition for media frenzies promoting the “Right are racist, violent domestic terrorists in need of extermination” narrative.

To those living in cities and suburbs my suggestions are:

1 – STAY HOME! Do not take to the streets. Do not leave your property. Do not go to a fight.

Self-defense on your own ground from direct attack should be the only engagement any of us consider!

2 – Remove any “loud” advertising from your home and property, e.g. Trump flags, or the like.

3 – Get your vehicles off the street and into a garage.

4 – Monitor all social media, especially leftist accounts – they will be streaming their activities. Do so to stay on top of their plans, which may include your neighborhood. Record/capture/save all you can as evidence. They tend to delete after the fact, so archive it.

5 – Have enough supplies to stay home for at least a week. The time to do that is NOW – Monday may be too late.

6 – Have an escape plan. Bug out bags already in the vehicle, gas tank full. Should the hint of serious unrest present itself in your neighborhood, LEAVE! And better to leave too early than too late.

ANTIFA and BLM have barely been visible since the election – that should serve as a clue to those paying attention. Being they stopped serving a purpose to the left, they may not have the same rapid response mechanisms (communications, funding, transport, leadership, etc…) in place as they did last year, leaving their ability to gather masses by mid-week lacking.

Also, unlike last year when Trump offered National Guard to assist Kenosha and it was refused, National Guard has been called up and is already en-route and will be present all week (amazing how Kenosha, and Wisconsin, suddenly care about riots.) And, weather may play into it, as well. Thus, it is my most sincere hope this all blows over. Of course, hope isn’t a plan. Also, police departments in major metro areas have been canceling days off for officers and are making preparations for unrest.

Go down your check list. The clock is ticking. 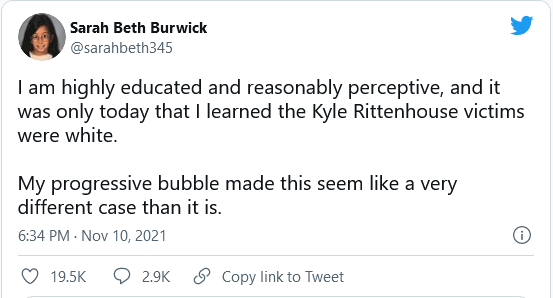 Never underestimate the level of ignorance we’re dealing with