“I’m not upset that you lied to me, I’m upset that from now on I can’t believe you.” – Friedrich Nietzsche

Rarely a day goes by that some form of the statement “Chicago has the strictest gun laws” is repeated on social media and on gun forums. Even the NRA and GOA representatives continually parrot that line,  usually in reference to the record murder rates the city has experienced this year with the attached comment, “How’s that gun control working out for you, Chicago?“. Most reading probably agree, and have repeated it. But, here’s the problem:

Chicago does not have the strictest gun laws. Not even close.

Chicago used to – Rifles and shotguns had to be registered with CPD, which was all but impossible to do, and the city had a complete handgun ban. The only way a person could own one was if it was registered with the city, in their name, before January, 1982 – and re-registered every year after.

However, in 2010, SCOTUS ruled in McDonald v. Chicago that the city’s handgun ban was unconstitutional. Shortly after, the city instituted an ownership permit/ registration/training scheme which required massive amounts of hoops to be jumped through for a resident to obtain a handgun.

Enter Moore vs Madigan – In 2013 the 7th Circuit ruled that the Right to Keep and Bear Arms extended outside a person’s home. The Court basically told the State of IL they had to issue carry permits.

In July of 2013 the IL Legislature passed shall-issue CCL legislation, and in it removed the home rule privileges regarding gun laws from municipalities. What that meant was Chicago’s licensing and registration requirements were now null and void.

So, how do Chicago’s gun laws stack up compared to places with obtrusive gun laws like NY, Los Angeles, New Jersey, etc.? They really don’t.

Here’s how it breaks down:

Every IL resident who wishes to possess a firearm or ammunition must first obtain an Illinois Firearm Owner ID Card (FOID.) The card is shall issue, is $10 and good for 10-years, and may be applied for through the mail. Now, is that BS? Sure – it’s dumb, it does nothing, and it’s a violation of Article II – but it amounts to a minor inconvenience. So, Chicago residents need that before they may buy a gun.

Chicago has a city ordinance that for all intents and purposes prohibits FFL dealers from setting up shop in city limits. Yeah – that sucks, and that is a hurdle residents have to jump, but it amounts to going to the nearest suburban gun shop and making your purchases there – Again, a speed bump, and certainly tenable by most residents.

Cook County, where Chicago is located, has its own “assault weapons” ban, which, as a compromise during debate of the CCL law, was allowed to stand. However, it’s more of a suggestion since each city has to sign on to it, and most have not – and only those that did before, or during the grace period after, the CCL legislation was passed may abide by it. No new cities in Cook County may join on. There are a plethora of gun shops in Cook County stocked up with all manner of AR15’s, FAL’s, AK’s, etc., ready to sell to IL residents with valid FOID cards. The Cook County AWB is also in litigation, and is highly unenforced.

Chicago adopted the ban pre-CCL, but, it has little to do with handguns – only effecting things like the Tech9’s, which are ridiculous choices for personal defense, anyway. All manner of practical, modern, auto-loading pistols are legal to own in the city, and available in suburban gun shops for purchase.

The CCL legislation also preempted the over 10-round magazine capacity restriction included in the Cook County ban. So, 17-rounds in your M&P are fine, according to state law. Chicago never repealed their 10-round rule, but the state law is clear.

Obtaining a carry permit requires a 16-hour class, fingerprints, and a fee – but it is shall issue (9 states still don’t have that.) A few non-felon applicants have had problem obtaining one due to the review powers local LE have, but many are able to appeal and move forward. It took about 6 to 7 months for the first CCL permits to be approved as the process got off the ground, but it has streamlined a bit and most new permits are issued within 30 to 45 days. As of today there have been around 170,000 (estimated) permits issued.

IL does have a 3-day wait on handgun purchases.

Cook County has an additional ammunition sales tax, and a trigger lock rule for homes with minors.

Yes, there are some grey areas and things people will argue about – and yes, it’s not perfect and the state has a long way to go before its Arizona. Also, it could all change tomorrow as no person’s rights are secure when the legislature is in session, but…

This is what it boils down to today for residents of Chicago:

A Chicago resident who is eligible under state law (non-felon, not under an order of protection, not under psychiatric care, etc…) may secure a FOID through the mail for $10. They may then frequent the gun shop of their choice outside the city limits (there are MANY) and purchase whatever carry handgun (or handguns) they would like. Three days later they may return to pick it up, and then transport (under Federal regulations) it to their domicile in the city.

If they choose to carry, those 21-years-old and over, may contact one of the 4000+ IL Certified CCL Instructors and sign up for a class. They’ll have a permit in a couple of months.

With that permit they may carry as many pistols as they like, with as many rounds as they’d like, concealed, down any street in Chicago. 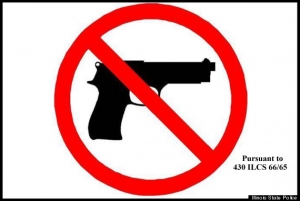 But what about “gun free zones?” Yes, Chicago has such rules. Guns are forbidden on public transit, as well as anywhere there are State Approved posted signs. And I would agree that it’s stupid and arbitrary, but, for the most part, those signs are not posted anywhere on the streets or sidewalks where gang members in Chicago are shooting each other.

So, does Chicago have restrictions? Sure. Just not anywhere near the far off galaxies of New York City or New Jersey, and not anywhere near the perceived level the gun world parrots. Most people simply think Chicago residents can’t own guns, or doing so is an endeavor equal to climbing the Matterhorn – not true. But, more importantly, the gun laws are not in any way affecting the behavior of gangsters doing gangster things. The gun laws, either positively or negatively, are simply not the crux of issue with murders in Chicago. And we, as supporters of the right, do ourselves a disservice suggesting otherwise.

I’ll explain why in Part II