It was reported in St. Louis this week that a woman discovered a loaded handgun under the seat of her Hertz rental car.

The lessons regarding proper holsters, unattended weapons, and personal responsibility are obvious – I want to look at different aspect, here.

What I found most compelling in this case were the comments posted on multiple media, and social media, outlets.

OK – I get humor. I understand that most were tongue in cheek. I accept that not everyone is serious – but, we need to get a few things straight.

First, when any of us “find” a gun – regardless of location – the one thing we know for sure is that IT ISN’T OURS! It is not our property. When you take such a gun as your own personal property, it’s what is referred to as STEALING. …Which makes you a THIEF. Sure, one could pretend that the Archangel Gabriel hand-delivered it as a gift from Heaven, but that just adds LIAR t the list.

It’s immoral to keep it. The end.

Second, when we find an orphan gun in public we have no idea if it has been used in a crime. I’m not interested in placing any random guns in my safe that I didn’t procure from a trusted source, and that I can’t document the date I took possession of them. That goes double for my carry holster!

Third, everything we upload on the internet related to our attitudes, mindset, and philosophies towards…well, ANYTHING, are discoverable in court. When we are prosecuted for a related crime, the prosecutor will comb our posts for all that can be used against us. When one types “I would have just kept it” they have announced to the world their intent to steal. Doesn’t matter if it was a joke – they’ll have to defend that statement in court. They might even be successful (while racking up massive by-the-hour bills.) But, will it help them? Once a jury has heard something, can they “un-hear” it? The internet is not conversation had sitting in your living room with your friends. It’s forever – documented word-for-word. Facebook doesn’t have a sarcasm font, and no post is ever truly deleted.

…and, now that I think about it, Alexa is probably recording you in your living room, too.

Guns are found unattended almost daily in bathrooms around the nation. Generally, they are left behind by absent minded owners who disarmed to use the facilities, then wandered off oblivious to the safety hazard they created. Usually, especially in smaller towns, the gun is secured by an employee and embarrassingly retrieved by the owner once discovered missing. Few legal repercussions are suffered, and its not reported on. I know of dozens of such events. However, on occasion, a gun is found by a child, and sometimes the guns are absconded with, and sometimes they are later used in crimes. None of that is “good!”  And we should not be the catalyst – either by leaving a gun unattended or ignoring one that has been. 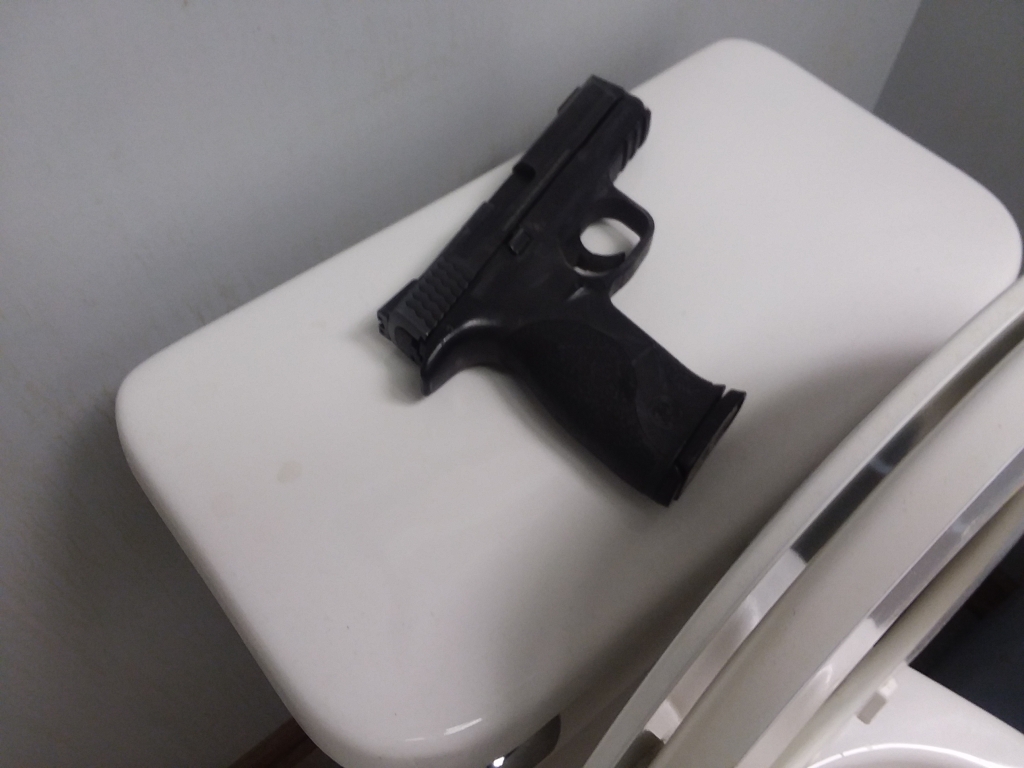 Imagine your surprise finding this in a public bathroom. …and imagine the surprise of the owner when they discover it’s missing.

What should we do when we find a random gun?

Personally, I’m going to treat the area as a “crime scene” as best I can.

If possible, don’t touch it, close-off the area and notify the police. Meaning, if it’s in a store bathroom, you alert the manager, have them lock or block the bathroom door, and wait for arriving officers. (“Sorry, folks, the facilities are out of order.”) We don’t want kids touching it – we don’t want anyone touching it. That includes us! I’m not excited to leave my fingerprints or DNA on an orphaned firearm found lying around in public. I’ll do my moral duty and attempt to manage the situation, but there is a certain amount of self-preservation I’ll exercise while doing so.

What if we can’t secure the area?

Before we try to re-locate it, we need a plan. Where are we taking it? Where are we putting it? What are we doing with it? Think before you leap. Is there somewhere available to properly secure it? Can we move it without causing a public panic? Is there a “safe direction” to point it as we do so?

Again, I’m going to do everything possible not touch it with bare skin, the best way I’m safely able do so.

If it’s a retail store, have an employee bring you a plastic bag to use as a makeshift glove. Personally, I have a set of exam gloves with the wound dressing in my pocket, I’ll don those first.

Should we unload it?

I wouldn’t – but, more importantly, I wouldn’t allow the unskilled to attempt to unload it, either. In my life, that’s most people I encounter. If you’ve trained with our school, or one like it, you will be the “expert” present. You may have no choice but to take control and unload it, especially if the authorities are too busy to immediately respond. I won’t be camping out in the restaurant manager’s office till dawn just to babysit a stray pistol, so I’ll unload it if that’s the best course of action for all involved.

Which brings us to the next question.

What if the best case is to remove the firearm from the scene ourselves for safe keeping until police can retrieve it?

It’s not ideal, but it may be all we can do. In such events I would advise calling 911 first, ask to be connected to an actual officer, preferably a supervisor, and proceed as instructed. I would also take video of the firearm before interacting with it. Get a proof of location, date, and time, if possible. Then, secure it in something you don’t mind giving away to the police. Box, bag, whatever. They can handle the gun at the station, not in my entryway.

[Reminder: We never want to be standing with a gun in our hand when the police arrive. No matter what conversations you’ve had with dispatch, no matter how innocent it may seem. Hands should be empty and visible for responding officers.]

The above are suggestions, you may have a better idea – Great! Whatever you decide to do, have a plan. One that won’t haunt your conscious…or leave you in handcuffs.

“Planning is bringing the future into the present so that you can do something about it now.” ― Alan Lakein, author