“Youth is wasted on the young.” – George Bernard Shaw

In August a student group calling itself “Cocks Not Glocks” wafted on to the University of Texas campus to protest legislation allowing those with a valid carry permits to be armed on University property.

They claimed to be fighting “absurdity with absurdity“, but as is so often the case in the young, progressive mind, their logic not only falls short, but is completely absent. However, that hasn’t stopped the recent appearance of a second wave at UW-Madison, in response to the Wisconsin legislature considering campus carry.

I’m going to bypass the issue of college students creating an organizational title and forgetting the punctuation (after all, I’m lucky I graduated high school) and I’ll let you figure out for yourself the unintentional accuracy of their faux pas. Instead, let’s dive into

[Oh, the jokes write themselves!] the concept of ‘absurdity.’

Cocks Not Glocks is an organization dedicated to harnessing the compassionate and creative energy of young people across America to change the face of safety.For too many generations, Americans have equated guns with safety. Everyone is scared, we get it. But we refuse to accept guns as the cure to society’s ills.  We believe that humor is fear’s worst foe, and that fear and division are the greatest drivers of violence. Although we began as an anti-campus carry movement, we are not necessarily anti-gun. Our activism serves to fight fear, and to put an unavoidable spotlight on the absurd political and cultural barriers to progress.

First of all, I’m not comfortable with the appropriation of the pre-steam-era rural farmer’s culture by use of the word harnessing. You girls need to check your privilege!

Just kidding. But, yeah, that’s actually how stupid it sounds when progressives respond with such preaching.

But, enough – time to dissect that mission statement!

“Cocks Not Glocks is an organization dedicated to harnessing the compassionate and creative energy of young people across America to change the face of safety.”

I’ve got news for you, ladies. There is no such thing as safe. Safe is a condition that does not exist. It never has in this universe, and it never will. But, if safety had a face, it wouldn’t be bleeding from a broken nose or have it’s eyes swollen shut, and it wouldn’t be blue, lifeless, and found floating in a creek after the body it was attached to was raped and strangled like Haruka Weiser‘s was at UT-Austin last August.

No, if safety had a face it would be the ecstatic woman who just passed her pistol qualification course. That’s a face I’ve seen over-and-over again through the years, the memories of which keep me sleeping well at night. 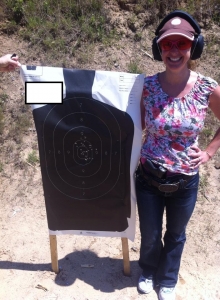 “For too many generations, Americans have equated guns with safety.”

“…we refuse to accept guns as the cure to society’s ills.”

Yeah – me, either. No one is suggesting guns are the cure to “society’s ills.” You’re getting cause and effect mixed up – you might as well say seat-belt advocates are promising an end to traffic accidents. Guns are a means to an ends, and most certainly can be used as a cure for tyranny. But tyranny is just a result of society’s ills. Guns are an immediate action plan when society’s ills come to fruition and try to stab you to death on the quad at Ohio State after they run over a dozen of your friends.

“We believe that humor is fear’s worst foe…”

Actually, education is fear’s worst foe. Humans fear what they don’t understand, not what fails to make them laugh.

Humor is not the answer to the violence of sociopaths and rapists. I would suggest that no matter how much of a comedy fan Ted Bundy was, a good joke was not going to change his goals. No, the best way to get his attention would be to show him the loud end of a gun. And, if need be, inflict a few extra 9mm holes in his upper thorax. Yes – the message to the rapist should be: “Glocks, Not Cocks.”

“…fear and division are the greatest drivers of violence.”

Perhaps in terms of international conflict and civil war one might be able to stretch that into a small amount of factual argument – but the average rape, not so much. Sociopaths are not interested in your rainbow utopia, or where you sit on the victim hierarchy chart, or how much sensitivity training you’ve had in your ‘14th-century Women’s Studies And The Present Day Patriarchy As It Pertains To The Gender Wage Gap‘ course. All they want is to bathe in the terror they inflict during your last few moments of life.

“Although we began as an anti-campus carry movement, we are not necessarily anti-gun.”

Meh – you don’t like guns – just admit it. And what’s worse, you’re not content simply not owning them, you insist on forcing others, by law, to be disarmed in some “gun free zone/safe space” fantasy that you pretend is respected by criminals. No one is forcing you to carry, so don’t. But quit making life and death choices for others. Simple as that.

“Our activism serves to fight fear, and to put an unavoidable spotlight on the absurd political and cultural barriers to progress.”

I gotta tell ya, the only absurdity that has a spotlight on it right now is your organization. And it could have been completely avoided if you’d just gone to class and invested your time in productive studies, but I digress…

Cultural barriers? …I can feel you patting me on the head right now. “You poor, old, outdated troglodyte. You simply need our superior intellectual guidance to know how to behave like a human being.”

Your idea of “progress” is pretending bad people don’t exist and disarming their victims. My idea of progress is raising children to be responsible, individual adults, who understand the risks involved with being alive on planet Earth. My idea of progress is making sure those individuals are trained and prepared for the troubles that may cross their paths, and to assure they have the cognitive reasoning skills and mental agility to reduce serious threats to mere speed bumps on the road of life.

Extending childhood into adulthood is not progress, it’s regress. It spells premature death – not just for the individual, but for the nation. You’re insisting on self-imposed weakness – And, like blood in the water, sharks smell it.

I can tell you this much about fear, my female students don’t live in it. And why would they? They carry guns they know how to use. They are the most free, independent, wealthy, healthy, and yes, privileged women in human history. They owe that to Col. Colt as much as Susan B. Anthony.

Or, am I being absurd?

“A great many people think they are thinking when they are merely rearranging their prejudices.” – William James