“So, Frank, why no blog posts lately?”

Honestly, the situation is too fluid. Every time I start to write something, data changes and my analysis is already out of date.

Besides, I’ve been in “watch and learn” mode over the past few weeks.

Here’s what I know today:

From my own personal observations in public (yes, my day job is “essential”), texts, emails, and phone calls I’ve received, and interactions friends and family have had in the last 72-hours, things are starting to get shaky out there.

People were smiling and full of nervous laughter when stacked in line with toilet paper 3 weeks ago. Now, not so much. No one is happy, everyone is stressed, and they are starting to get very rude about personal space and the last of anything on a store shelf.

About 30% of the people I see are now wearing masks or scarves (that number will be doubling by Monday with the new CDC recommendations), and it’s not helping personal interactions. Facial expressions are gone! Thus, sarcasm and innocent comments are no longer interpreted as such. The masks also afford a bit of anonymity to the wearer, which encourages rudeness.

The criminal element are picking up on the anonymity of masks, as well. Having our heads on a swivel in stores and parking lots is a must!

Two stories were sent to me this morning. The first from Chicago:
Nurse Attacked on City Bus

The second from France:
Hospital Hires Bodyguards For Doctors and Nurses

Both are indicators of what’s to come.

We can’t simply pull kids out of school for three months, add 6 million to unemployment in a few weeks, and pit the population against one another in a battle for personal space where they think defeat potentially means viral death, and expect there not to be long term damage.

Governors, mayors, and police are making threats and wielding massive amounts of “emergency powers” at citizens. In Maryland the Governor is justifying arrests for violators of his “social distancing” order.

A wave border, literally in the ocean without another person in sight, was arrested – which required police to lay hands on him – in Malibu this week.  How, in this case, does exposing police officers, jail guards, and other prisoners to potential infection help the problem? I don’t know – however, it is a great example of how when it comes right down to it, all government amounts to is FORCE. That’s what it does. That’s all it knows how to do.

When you ask for government – whether it’s a tax, license, plastic straw ban, or nationalized health care – it comes with guns. 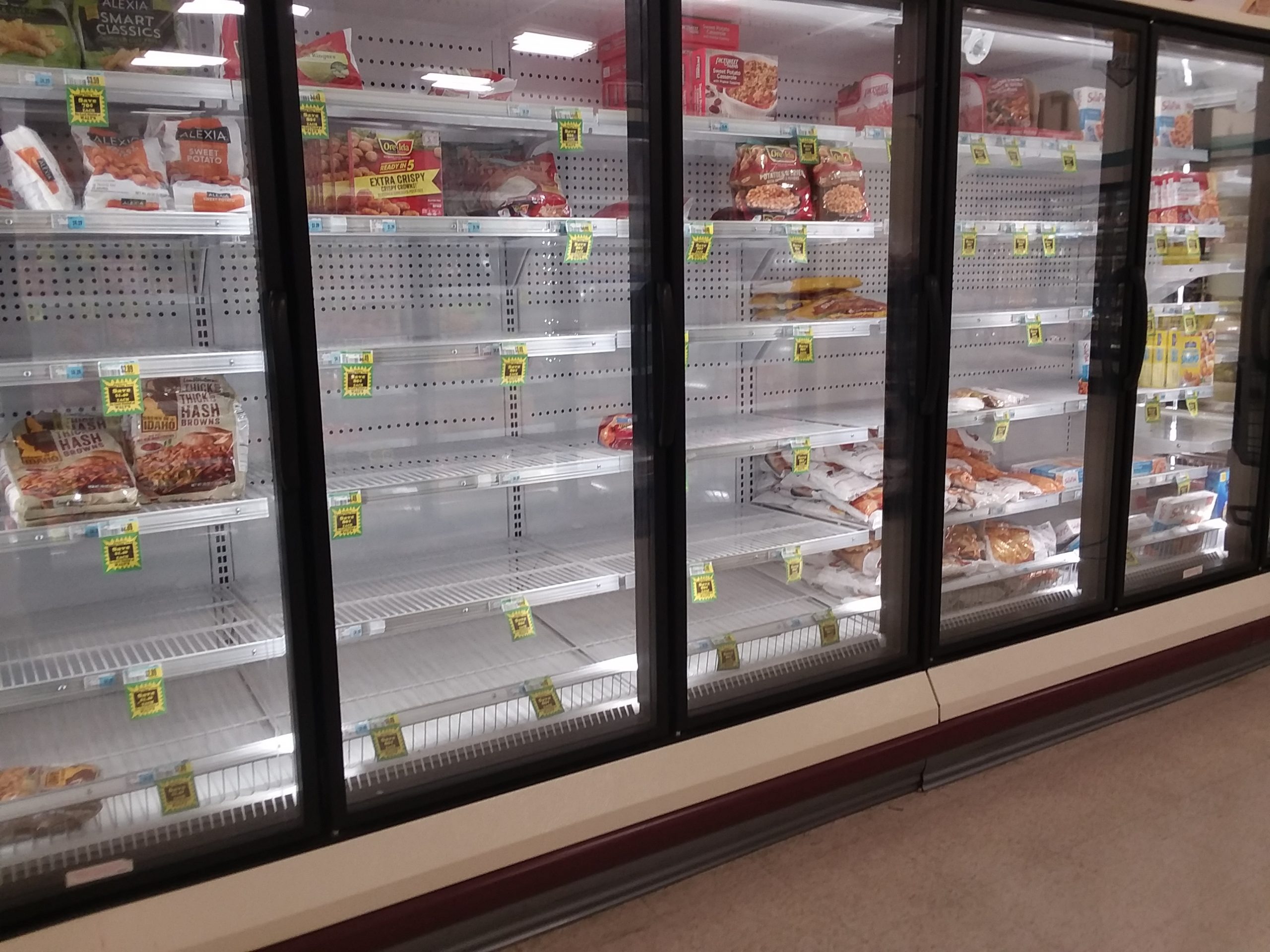 Picture author took yesterday at a local grocery store. Supply chains are as stressed as the citizenry.

Those of you monitoring social media might notice the salivating displayed by many at the potential opportunity to report others for any and all infractions of the “new rules.”  People are begging for 800-numbers and apps to turn in violators.

Some may wonder how Jews were so easily rounded up in Germany, or how Rwandan murdered Rwandan with machetes to the tune of 1-million in three months, but there is NEVER a shortage of snitches ready to drop a dime on their neighbors.

Such a mindset probably goes back to childhood and some sort of unhealthy relationship with authority – but, at this point, the psychology is irrelevant. Such creatures exist, and you’d better understand that they don’t care what happens to you when they narc. All that matters to them is the validation of their moral superiority.  Remember, when it comes to food, guns, cash, and the N95 mask on your face, never underestimate the power of greed, envy, jealousy, or the narcotic addiction of pat on the head from a badge. Many will throw you under the bus in a heartbeat for the momentary feeling of playing god.

They might also do it because it pays: LA Mayor Says “Snitches Get Rewards”

Across the nation, businesses are shuttering, domestic violence is on the rise, and supply chains are starting to see minor, but obvious, breaks.

With more and more cities and locals now instituting limits on the number of customers allowed in stores, this will create lines outside where people will have nothing else to do but imagine the person behind them crossing the magical 6′ line and now having a toe at 5′ 11″. Use your imagination about how that will play out when the word spreads from the last person exiting that there are only two packages of toilet paper left.

Right now there are 10’s of thousands of homes around the nation where a single abusive parent with a drug and/or alcohol problem has been kicking the snot out of their children for weeks. At least when school was in session the kids got a 7 hour-a-day break. In the summer they go outside. Not now, and not for the foreseeable future. There will be deaths.

A few more weeks of this and we will be on the cusp of a complete societal breakdown. All we’re missing is a shutdown of air travel and public transit, as well as a few missing replacement parts for the power grid and the water treatment plants. When grocery store employees quit showing up for work, and the first minor riot over the last can of soup occurs, we will be at the tipping point.

The path we are on is unsustainable. Simple is that.

It prompts the question: Is the cure worse than the disease?

I would suggest it is. But, I’m not in charge, nor do I want the job. What I can do is my job, which is to direct you towards the best positioning possible to navigate this storm.

If we are to take the administration’s word for it that the next two weeks are going to be “rough”, then my advice is as follows:

Make a supply run today before sunset, getting what you need for the next two weeks. Then, stay out of stores. Stay out of drive thru’s. Don’t go into public without a serious medical or family care need.

The fights are starting. You don’t want to be in, near, or a witness to, them.

Should you have no choice but to venture out, do so armed.

And no matter what, carry pepper spray! Most serious problems can be solved with a shot of OC to the face. [Side note: wearing gloves and a face mask can be a great help when you deploy OC. Of course, that works both ways.]

Our future may still be salvageable. Perhaps the miracle cure will show up tomorrow, and we’ll all be back to work in a week.

But, today, don’t act like life is what it was a month ago. It’s not.

– When the Levee Breaks by Kansas Joe McCoy & Memphis Minnie