“When you least expect it, you’re elected!” – John Farnam

Recently, Fortress Staff Instructor Tommy Teach was dining at a local restaurant when a commotion began near the entrance door.

An elderly man (75yo), who was exiting, had tripped on a fold in a throw rug, fell, and struck his head on the exit door handle. This caused a severe laceration which was now bleeding profusely. The employees at the check in desk were in a panic, and no one present seemed to have a clue on what to do. One hostess did attempt to hold a cloth napkin to the wound, but was having little luck with it.

Tommy, being Tommy, had a bag with him containing an advanced trauma kit which he grabbed off the back of his chair and immediately made his way to the victim.

After the standard introductions to the man and his wife, as well as asking permission to tend to the wound, Tommy went to work.

He’d been donning exam gloves during the initial conversation all while asking the patient’s age, and if he was on blood thinners, etc. – Time being critical with the blood loss.

The wound required TWO Israeli Battle Dressings (IBD), as well as a z-pack of hemostatic gauze, in order to get the bleeding under control.

After the wound was tended to, Tommy applied an automatic blood pressure cuff, as well as a PulseOx, to monitor vital signs until EMS arrived.

Once stabilized, the man’s wife began insisting she transport him to the hospital.

As well-meaning as she was, having her transport him was not a good idea. Her emotional state, and emotional relationship with the patient, being reason enough. However, even if she was able to stay calm and focus on the road, she was not trained in how to monitor him along the way, nor would she have been able to do so properly while driving. Should he have developed a complication, she would not have known how to deal with it. Lastly, with head injuries being time sensitive (concussion/skull fracture/subdural hematoma, etc.), transport needed lights, siren, and speed.

Rather than argue points she might take personally, Tommy explained to her that due to COVID and staffing shortages emergency room walk-ins can often have wait times measured in HOURS, sometimes DAYS for the non-life threatening cases. However, ambulance arrivals are usually given priority. Thinking about what was best for the husband, she immediately capitulated.

As true as everything Tommy told her is, a snag still appeared during this event.

EMS arrived in 15-minutes and took him to a local South Bend, Indiana, hospital, where he proceeded to wait for TWO AND A HALF HOURS – all while the wife was waiting out in her car per the facilities own ridiculous COVID regs. Eventually she’d had enough She locked on Stealth Mode, walked in, collected her husband without notifying anyone, walked him out, loaded him in their car, and took him to a hospital in Plymouth, Indiana. There, they were met at the door by a nurse and her husband was immediately treated by a doctor while she sat holding his hand. Different hospital, different attitude.

Total time before a doctor went to work on him: 3-hours and 30-minutes.

A few days later, Tommy received a thank you note form the couple. The man and his wound are doing just fine – his pride slowly recovering, as well. 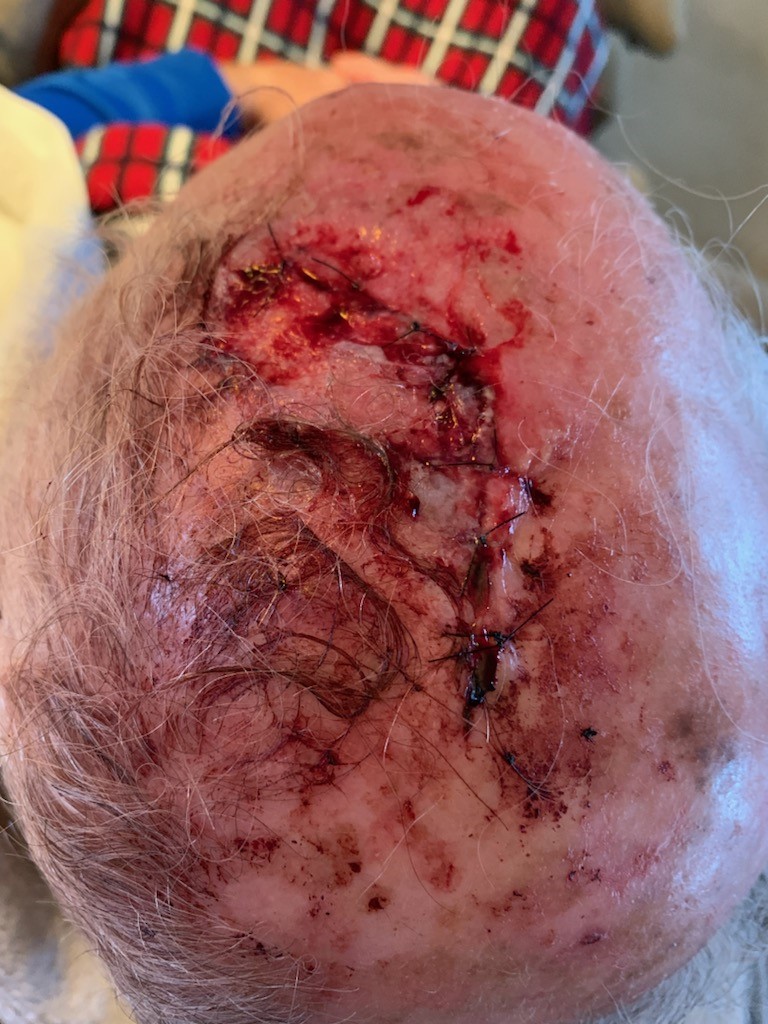 Patient all stitched up. The size of the gash was approximately 5+ inches long.

1. We don’t get to choose when our next gunfight, or our next medical event, occurs. Ready, or not, here it comes! And when it does, what training you’ve engaged in and what gear you have on your person or at hand will be it – It’s a come as you are affair!

The above is the MINIMUM for daily carry.

2. A plan is just a list of things that doesn’t happen.

Have a plan. Don’t be in love with your plan.

When there is a 2 ½ hour wait at the ER, you might need to call an audible and relocate to a different hospital.

3. Just because you know something, don’t expect everyone else to know it.

It’s more common than not for healthcare professionals to be unfamiliar with the IBD. We hear it all the time.

More importantly – just because you informed EMS about a patient’s preexisting conditions, don’t expect that information to be passed on. Everyone who undergoes hospital care needs an ADVOCATE. There needs to be a person present, usually a family member, who is authorized to make important medical decisions on behalf of the patient, as well as monitor what is being done, when its being done, and by whom.

Our friends in the health care industry have been passing on to us horror story after horror story of overworked and underpaid hospital staff administering the wrong medications, or dosing patients late, or twice – not responding to help calls, not feeding people, not cleaning them up – generally ignoring entire floors of sick. All this while loved ones are “not allowed” to be present.

The problem is multi-layered as most problems are, and the blame hardly falls completely on the shoulders of the nurses and orderlies. However, rather than waste 1000-words on a “Why government has ruined healthcare” rant, I’ll stick with pointing out the reality. And that reality is: we’re all on our own. You can’t ship a loved one off to the hospital unescorted and expect them to be looked after properly.

This was simply another in a long line of on scene trauma events Tommy has successfully tended to over the years. He, and all of the Fortress Instructors, are people of action. They go to problems; they don’t run for them.

Once again I’m overwhelmed by the incredible people I have the privilege to call friends.

Perhaps we should all take a moment and evaluate not only who we surround ourselves with, but ask if we are worthy of them. Are we holding up our end of the relationship? Are we ready to put in as much effort as we take? Are we ready to aid them when they need us?

Only you can answer that for yourself. But, if you’re not, adjustments need to be made.